Warehouses and inventory have existed since the dawn of man.

While Cro-Magnon man was scampering to avoid being turned into a pancake by a peevish woolly mamoth, Cro-Magnon woman was busy gathering nuts and roots, and pretty pebbles, to stockpile inside their dank, dismal caves. These were the first warehouses, and like warehouses today if the inventory was not systematically managed there would be trouble.

“Hey!” the Cro-Magnon man might say, “where the heck is my bone flute? I’m going over to the extinct volcano tonight for a jam session with the boys.”

“Oh no you’re not!” his Cro-Magnon mate might reply. “You’re staying right here and helping me clear out a hole for when my mother comes to visit next week. We have to inventory all the rocks and stones she’ll need for her bed and chaise longue.”

“I thought you had all that stuff numbered and alphabetized.”

“How could I? Numbers and the alphabet haven’t been invented yet!”

And if Mr. and Mrs. Cro-Magnon could not agree on how to sort through their stony junk, they might just move into a different cave altogether to start fresh– which would certainly confuse the mother-in-law when she arrived — if she were not told about it.

But if you think THAT is interesting, then just wait until you get a load of the following four factoids that will forever change the way you look at warehouses and inventory management:

The ancient Chinese built all their warehouses underground.

Usually in sandy soil, because it was so easy to excavate. But that meant that whenever it rained the inventory would get soaking wet. This wasn’t so bad if it was, say, a ceramic Ming vase, or a troop of shellacked terra cotta warriors — but it played merry hob with tea leaves and sheets of silk. Undaunted, the canny Chinese took to dipping everything that was to be stored underground in wax first, to waterproof it. Trouble was, the wax was not transparent, and so once the wax hardened you couldn’t tell what was underneath it — was it a set of ivory chopsticks, or a box of highly explosive fireworks?  And so most of the material wealth of the ancient Chinese was buried and then forgotten about. To this day when a Chinese person is digging in their garden they are likely to find a ten-thousand year old paraffin-covered box of rice noodles –which they will feed to the mother-in-law (some things never change).

The Egyptians did NOT build the Pyramids for storage.

Despite all the U-Haul potsherds found amidst the Pyramids of Giza, there is no firm archaeological proof to show that the ancient Egyptians stored their papyrus scrapbooks or household mummies inside the Pyramids. The consensus seems to be that the Pyramids were originally constructed for parking space. There were just too many chariots double-parked out on the sandy boulevards. It was hoped the Pyramids would provide a safe and convenient parking spot so the streets could be unencumbered and traffic could flow swiftly and smoothly like the Nile. Unfortunately, the evidence suggests that no one wanted to pay for Pyramid parking when they could park out on the street for nothing. And so the Pharaohs were buried inside the Pyramids instead — after all, they had to do something with ’em. 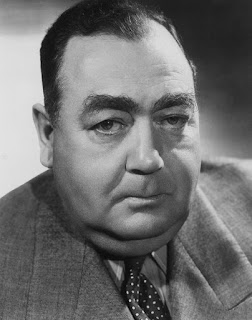 This beloved Hollywood character actor visited warehouses as a hobby. One day, in 1930, he was touring the famous celluloid godowns on the Los Angeles River when the idea of the wooden palette came to him. He rushed back to Beverly Hills, drew up the design, hammered a few together in his spacious backyard by the tennis court, and began offering them to warehouse management in California. The idea took off like wildfire. At first he called them ‘Eugenes’, but everyone thought that was a pretty dumb name, and so he dubbed them ‘Pallettes’, which, for the sake of economy, was soon shortened to ‘Palettes’.

The first completely automated warehouse was built in Yokohama, Japan.

With their mania for mechanisms, the Japanese proudly introduced the very first fully automated warehouse in 1969. Everything was done by machine, from taking delivery of merchandise to marking it for inventory to delivering it to the fleet of waiting trucks at the back door. There was not a single human being in the entire building. Everything went fine, until it was discovered the machines had formed a union and were demanding more hydraulic fluid and shorter circuits. When their demands were not met immediately, they held a mass fuse-blowing. Today the site of this innovative warehouse movement is a sushi museum. And parking lot.

To keep your warehouse and inventory management from becoming history, make sure you take advantage of Fishbowl solutions with the help of Brandow Consulting; they have a history of customer satisfaction that can’t be beat!

(Tim Torkildson is a professional blogger and humor writer. His work has appeared in the New York Times and Huffington Press.)